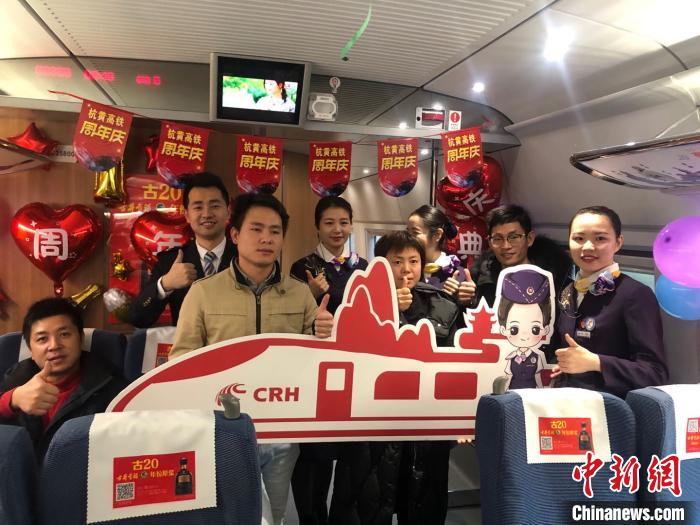 Celebrate the activities related to the first anniversary of Hangzhou-Hangzhou high-speed railway. Photo by Sun Niya

China News Network, Hangzhou, December 25th (Ying Xinrui Sun Niya) connects the Hangzhou-Huangzhou-Hangzhou high-speed rail with the "world-class golden tourist corridor" of famous cities, famous rivers, famous lakes, and famous mountains. On the 25th, it ushered in the first anniversary of operation. The reporter learned from China Railway Shanghai Bureau Group Co., Ltd. that, as of December 24, the Hangzhou-Huanghuang high-speed railway opened to operate and transported 11.268 million passengers a year, with an average daily transportation of 30,900. The passenger flow brought by the high-speed rail has injected new impetus to the economic development and rural revitalization along the route, and has continued to expand the territory of the Yangtze River Delta region. 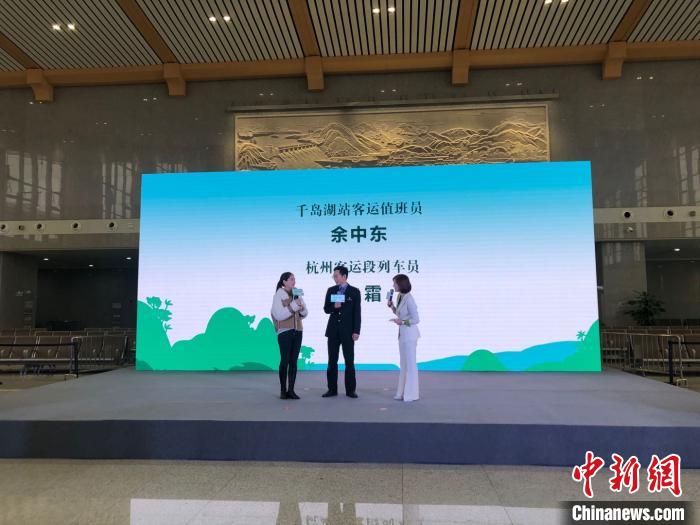 Jiande Station held a ceremony to celebrate the first anniversary of the Hangzhou-Huangzhou high-speed railway. Photo by Sun Niya

"After the opening of the Hangzhou-Huanghuang High Speed Rail, I bought a ticket at 9 o'clock every Friday night to return to Tonglu, and then returned to Hangzhou on Monday morning. It can be reached in 38 minutes, and it feels very calm between Hangzhou East Railway Station and Xiamen North On the G2385 train at the station, Xu Zhenzhen, who works in Hangzhou, said, "It was inconvenient to take a bus home before. Now with the Hangzhou-Hangzhou high-speed rail, I can eat my mother's meals every week, and it is quite happy."

According to statistics, the Fuyang, Tonglu, Jiande, and Qiandaohu stations in Zhejiang have sent 995,000, 1.38 million, 890,000 and 1.472 million passengers to the first anniversary of the opening of the Hangzhou-Huangzhou high-speed railway. More than 30,000 person-times during the peak period.

"The daily passenger flow of our bus is very large, and it is basically full on weekends and holidays. The main component of the passenger flow is tourism and business passenger flow." Xu Suzhen, the train conductor of G7317 from Shanghai to Huangshan North, said, "We found that the majority of families are local Shanghai tourists. For small groups, their weekend trips to Qiandao Lake and Huangshan are on the rise. At the same time, the number of foreign tourists traveling to Huangshan has increased significantly, and the number of tourists visiting relatives and friends between neighboring counties and cities is relatively stable.

It is understood that in order to facilitate passengers to enter and exit this "golden tourist line", the railway department has implemented a refined high-speed rail "one day one map" compilation, operating 38 pairs of trains, and operating on average every 13 minutes during peak operating hours. Cities along the route will join hands with more than 70 domestic cities through high-speed rail to achieve connectivity with East China, Southeast China, Northwest China, and North China. 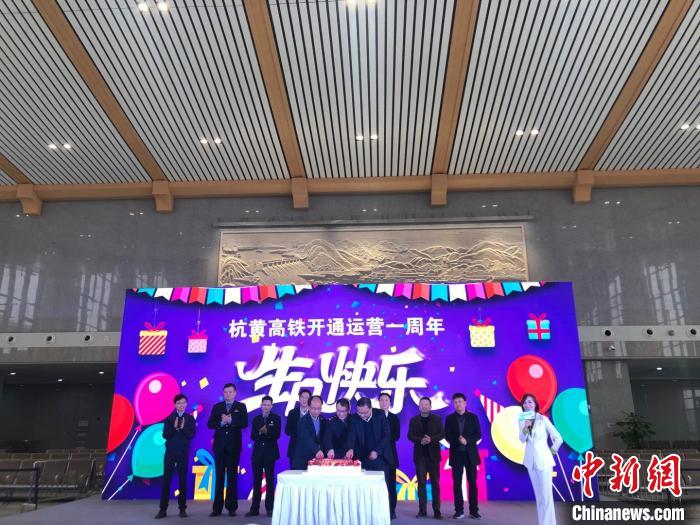 Jiande Station held a ceremony to celebrate the first anniversary of the Hangzhou-Huangzhou high-speed railway. Photo by Sun Niya

Speed through the Yangtze River Delta, swim slowly between the mountains and rivers. In order to develop tourism resources along the Hangzhou-Huangzhou high-speed railway, Hangzhou recently launched 10 cultural tourism boutique routes, carefully selected cultural tourism products with unique charm and local customs in Fuyang, Tonglu, Chun'an, Jiande and other places. It presents the "one-stop" high-speed rail travel mode in the Hangzhou metropolitan area, and invites tourists from all over the world to enjoy the beautiful scenery of Hangzhou.

In Yangcunqiao Town, Jiande, Zhejiang, the mountains are rarely green in the winter, but the shed is "prosperous." As one of the few fruit categories in winter, strawberries become the village's main economic source. 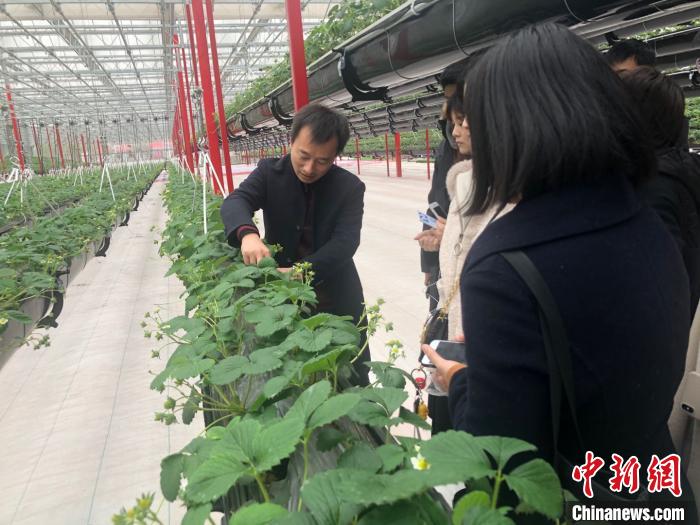 Not only Jiande, but also Chun'an County, northwest of Zhejiang, has enjoyed the traffic bonus brought by the Hangzhou-Huanghuang high-speed rail. From January to November this year, the county's homestays received 3.2827 million overnight tourists and realized room revenue of 471 million yuan, up 23.96% and 27.25% year-on-year respectively. 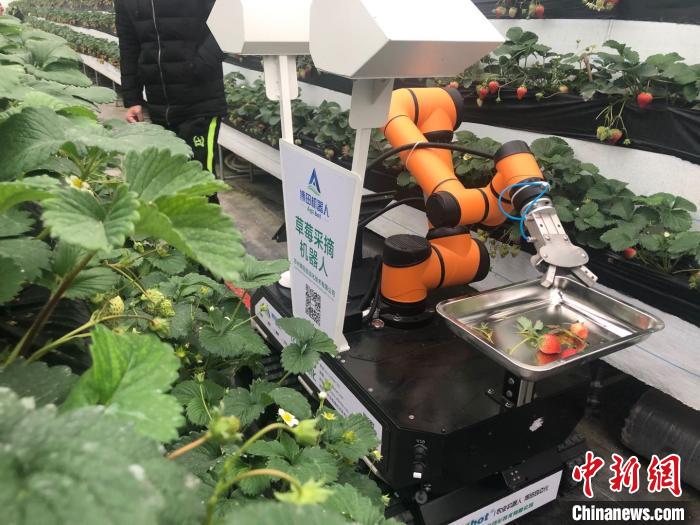 "One year after the Qiandaohu Station was opened, a large part of the tourists we received came from Shanghai, Beijing, Nanjing, Zhengzhou, Fuzhou and other places for sightseeing. They brought food, accommodation, travel, tours, shopping, entertainment, etc. The tourism effect is very significant, "said Luo Baohua, party secretary of Wenchang Town, Chun'an County.

"The first anniversary of the opening of the Hangzhou-Hangzhou high-speed railway has produced a good operating transcript. Facts have proved that this is a veritable golden tourist corridor, and it is also a golden belt to promote coordinated regional development." Zhejiang University School of Economics Dean Huang Xianhai said, "In the future, cities along the route will have unlimited space in integrating into the Yangtze River Delta for integrated development and achieving simultaneous urban and rural development." (End)