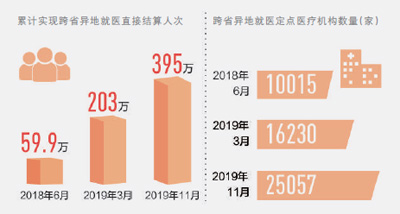 "I didn't expect that reimbursement was so convenient. I didn't have to pay the medical expenses as before, and then ran back to my hometown with the documents to reimburse me." Aunt Li, who lived with her daughter from Guangdong to Beijing, talked about the benefits of reimbursement from another place and smiled. . This year, she underwent cardiac surgery at the Chaoyang Hospital in Beijing. When she was discharged, her medical expenses were 35 thousand yuan, and she was directly reimbursed 20,000 yuan.

As of the end of November this year, there were 39.95 million insured persons like Aunt Li who enjoyed direct settlement of inter-provincial medical treatment and hospitalization expenses, and there were more and more inter-provincial designated medical institutions that can directly settle, with more than 25,000.

Behind the "3.95 million person-times" is the continuous improvement of the fairness and security of the medical insurance system. Many people live, work, and start businesses in different places, and no longer have worries.

——The beneficiaries include the group of “old migrant birds”.

In Hainan, the "old migrant birds" is a small group. The Hainan Provincial Political Coordination Research Report shows that from October 2017 to April 2018, there were 93,290 elderly people over the age of 60 who spent the winter in Hainan. Old people like the warm and humid climate of Hainan, and also hope that living in Hainan is as convenient as their hometown.

"I want to say" worrying birds for the elderly "is the most worrying thing. One worry is sick and the other is reimbursed." 70-year-old Cui is from Harbin, Heilongjiang Province. He has high blood pressure and often needs to be hospitalized to take antihypertensive drugs. 10 years ago, Uncle Cui had to pay for his medical treatment in Haikou first, and then returned to Harbin Medical Insurance Center with his receipts for reimbursement. Because the round-trip transportation cost is several thousand yuan, Uncle Cui often returns in batches, and the reimbursement cycle is more than half a year.

Since 2009, Hainan has taken the lead in piloting direct settlement of medical treatment across provinces across different provinces, and has successively signed settlement agreements with more than 10 provinces including Heilongjiang and Guizhou. First of all, it has benefited a large number of employees who came to Hainan to provide medical insurance for the elderly. After the national inter-provincial medical treatment and hospitalization direct settlement platform was launched, Hainan soon connected to other provinces. All insured "migrant bird elderly" can enjoy direct settlement services and no longer have to travel back and forth for reimbursement.

-Among the beneficiaries, there are people who go to a different place to see a doctor and people who live with their children.

Leaving the place of participation, the medical insurance can't report much, simply don't use it, or even get out of the insurance. This is the idea of a considerable part of the relocated elderly who went to see a doctor or live in another place before the implementation of the reimbursement policy.

A few years ago, at the Anzhen Hospital in Beijing, Mr. Li, who brought his child for heart surgery, did not reimburse him with the NCMS. "It was rarely reported, and it was very troublesome, so he just paid for it." Cancer Hospital Chen Dan, a cancer patient from Gansu, applied for medical insurance and "reimbursed it directly without any hassle."

The sharp contrast between the previous and the next reflects the continuous improvement of the fairness of the medical insurance system. Regardless of where you are insured or in another place, you can enjoy the convenience of reimbursement. The implementation of the off-site direct settlement policy has made the national medical security network denser and denser, and people's happiness has continued to increase.

——There are also beneficiaries who work and start businesses in different places.

Hao Xiaomei, an employee of China Coal Tunnel Engineering Co., Ltd., was dispatched to work in Xuzhou City, Jiangsu Province. The company is registered in Shanghai, and employee medical insurance is also handled in Shanghai. In Xuzhou, because of the low reimbursement and inconvenience, Hao Xiaomei generally did not dare to go to the doctor, and she bought medicines for her own illness. The employees of the company she worked for in Xuzhou had to pay all the expenses first, and then the company arranged for a special person to go to the Shanghai medical insurance department to reimburse them intensively.

The continuous expansion of reimbursement coverage in different places means that the protection function of basic medical insurance in our country is continuously enhanced, and people will enjoy medical resources more equitably, safeguard health rights and interests, and help build a healthy China.